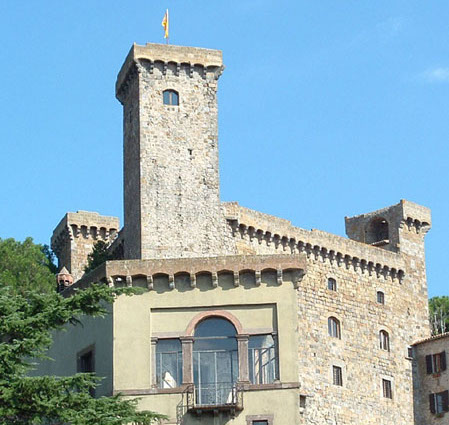 Bolsena is a charming little town that overlooks the eastern shores of the lake of the same name, on the Via Cassia, 100 Km north of Rome, in the province of Viterbo. A corner of Italy rich in history and traditions, immersed in the luxuriant and still unspoiled nature of the Volsini mountains, inhabited by a population that is friendly and hospitable, tenaciously attached to their roots. The origins of the village date back to the third century B.C., founded by the inhabitants who fled from Vèlsena (present day Orvieto), which was conquered and destroyed by the Romans in 265 B.C.  The new city, called Volsinii in Latin, prospered for several centuries, until the first Gothic invasions (410), when the Volsiniese community withdrew to the cliff that is site of the medieval quarter of the Castle, dominated by the fortress of the Monaldeschi della Cervara, today the seat of the Territorial Museum of Bolsena Lake. Numerous are the monumental remains that Bolsena preserves. The Etruscan-Roman town of Volsinii conserves the long city wall, the zone of the forum, bounded by a vast basilica, several patrician houses decorated with beautiful frescoes and mosaics, the amphitheatre and two thermal installations. But the monument for which Bolsena is known throughout the world is the Collegiate Church of Santa Cristina where, in 1263, the famous Eucharistic miracle took place that is said to have given rise to the festivity of Corpus Domini. On the day of the holiday Bolsena is decked out with a long carpet of flowers that indicate the route of the solemn procession while during the feast of Santa Cristina, patroness of Bolsena, the so-called “Mysteries” are opened. They are tableaux that represent the various sorts of torture to which the young girl was subjected. In the limpid waters of Bolsena Lake live numerous species of fish, such as the pike, the royal Persian, the Persian-trout; the most sought after fish is the whitefish while the most famous is certainly the eel, so beloved by Pope Martin IV, who, for this reason, was placed among the gluttons in Dante’s Purgatory.