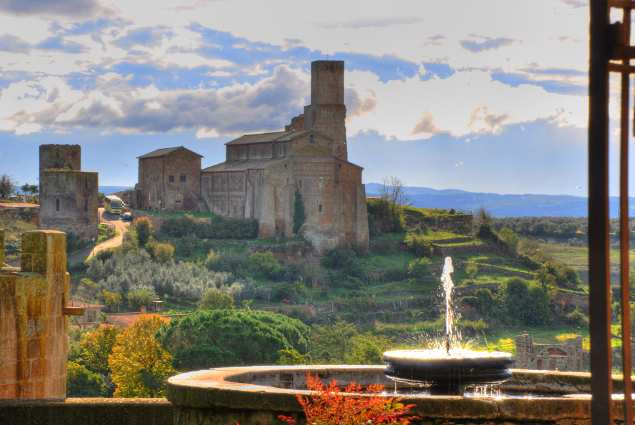 In the Roman era it was called Tuscana (the Etruscan), during the reign of the Pontifical State its name was Toscanella, and today it is Tuscania. Rising on a hill overlooking the Marta River, course of the water that from Bolsena Lake flows to the sea, it is an agricultural town with extensive cultivation of cereals and forage crops, with olive trees, vines, and spontaneous Mediterranean maquis vegetation.  Leaving an impression upon arrival is immediately the landscape, vast and luminous, and the colour, in an archaic countryside that almost isolates the town from everything else. In the inhabited area is the impressive hill of Civita Antica with the basilica of S. Pietro from the 11th century, the towers and the Episcopal palace of the powerful medieval Diocese. A little lower, behind the massive belfry, is hidden another Romanesque basilica, S. Maria Maggiore, dating from the 12th century.
The historical centre is still today enclosed within the turreted medieval walls, beyond which one detects the shapes of incomplete towers and the pinnacles and belfries of churches. Completely restored, it conserves memorable spots, framed by the façades of the buildings, homes, churches and decorated by fountains. One can still find here women grouped together, children at play and the old-fashioned tavern where men are engaged in the thick of their conversations. Squares, such as that of the Municipality: a theatre on whose stage, as in an ancient paradise, one sees Etruscan figures in perennial banquet.
Or one can enjoy open spaces such as the Torre di Lavello Park, pleasant belvedere of the district of the handsome fortress, where one can admire the old town, with its cottages, ruins and solemn churches, and where one can take in the panorama of the countryside for a moment, discovering all around it the small valleys with impetuous vegetation, where many cave necropolises of the Etruscans can be found, monumental remains of the aristocratic rulers: such as the mysterious Grotta della Regina, the cave of the Queen, whose remains, torn from the earth, now rest in the National Archaeological Museum of the convent of S. Maria del Riposo.